St. Anton am Arlberg (AT) 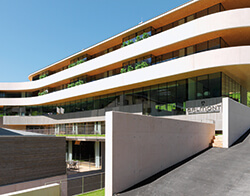 A total of around 2,000 m² of EGGER OSB boards were used for the construction of Hotel Arlmont****, which opened in June 2009.
The application possibilities range from structural use of a building board in wood construction to modern combinations in solid concrete structures. Their unmistakable texture was used as a visual decorative accent, both as ceiling cladding and as a concrete formwork board.

In addition, the boards were included in acoustically effective interior design planning. According to Mr. Stemberger, the owner of Hotel Arlmont, the decision to use OSB was immediately clear: “We found the OSB boards to be a convincing product from the outset. The boards create a special atmosphere in the hotel, which is highly valued by us and contributes to the well-being of our guests.”