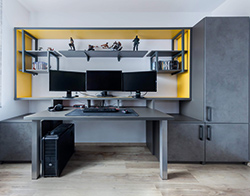 Different tones of grey and blue in a modern apartment. This three-room apartment in Bucharest has been designed to meet the specific requirements of a young man who works in digitalisation. One of the biggest challenges of this project was the limited space available. The apartment is not very large and the rooms are separated by corridors. From an aesthetic point of view, it is a masculine style with individual industrial style elements in metallic shades such as F187 ST9 Dark Grey Chicago Concrete and concrete grey textures.

In the work area, discreet accents were set with U114 ST9 Brilliant Yellow to break up the monotony of U741 ST9 Lava Grey and F187 ST9 Dark Grey Chicago Concrete. The kitchen is narrow and compact, but appears larger because it is symmetrically laid out with the right colour combination. The decor H1145 ST10 Natural Bardolino Oak brings brightness to the room. The use of U741 ST9 Lava Grey throughout the apartment creates a uniform style with an industrial feel. The bedroom stands out from the rest of the rooms due to the ludic wallpaper with light accents and blueish tones. Here, we have W1000 ST9 Premium White in contrast with U504 ST9 Tyrolean Blue.

All shown decors are reproductions.